On 22nd January, 2016 a press conference was held to announce the Ticket Sale Launch of Rio Olympics 2016 in India. The International Olympic Committee has appointed Fanatic Sports – India’s leading sports and experiential travel company – as the official Indian Authorised Ticket Reseller for Rio 2016 – the biggest spectacle this year.

Fueled by their passion for sports, Raghav Gupta and Anant Roongta, Founders of Fanatic, noted: “2016 promises to be a great year for sport and we are excited to be a part of it. It has been an absolute honour to have such a coveted title bestowed upon us. We thank the IOA for their support and trust. Simultaneously, this opportunity in itself is a great responsibility and our constant endeavour is to do justice to it.” 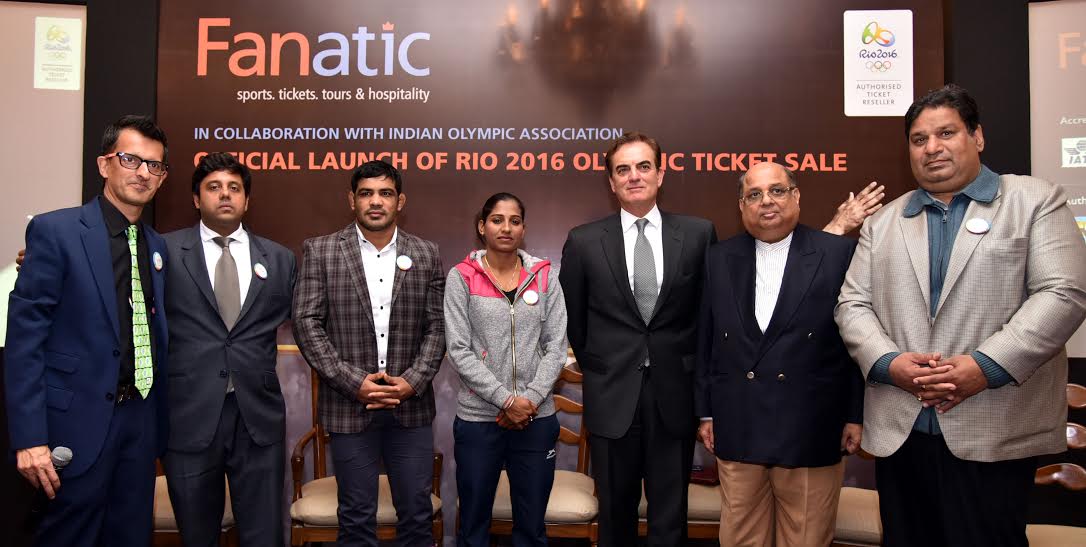 As the exclusive Authorized Ticket Resellers for Rio Olympics 2016, all Indians travelling to Brazil for the games are obligated to purchase tickets from Fanatic Sports. Mr. Ramachandran N, President, Indian Olympic Association, said, “The whole idea of ATR appointment is to propel the spirit of Olympics in the Indian contingent.”

Hosting the 31st Olympic games for the first time, Rio – the capital of Brazil – has something for everyone. From world famous beaches in Copacabana to scenic outlooks of Corcovado, Rio has the lion’s share when it comes to tourist destinations in the Southern Hemisphere. “I look forward to huge numbers travelling to Rio from India for Olympics 2016,” said His Excellency, Mr. Tovar de Silva Nunes, Brazilian Ambassador.

Come 5 August 2016, you can witness over 10,500 athletes from 206 countries participating in 42 sporting events. If you’re a sports enthusiast, this should be on your bucket list.

Gautam Bhimani, renowned sports presenter, said: “This year has conspired to combine the best of both worlds. The ultimate quadrennial carnival of sport hosted by a city that epitomizes carnival. And Fanatic Sports have diligently persevered to pave the road to Rio. Count me in!”

Fanatic, as a dedicated sports travel company provides once in a lifetime experiences to the world’s premier sporting events. They work closely and officially with major rights holders such as ICC, FIFA, Wimbledon, UEFA EURO 2016 etc. Their sporting tours are organized with adept planning and their packages include official match tickets, VIP hospitality, luxurious accommodation, extraordinary experiences and a range of bespoke travel services. For the ultimate sports fan, Fanatic is a game changer, as they offer edge of the seat thrill, a 360 – degree sporting experience that brings you closest to the live action!

For more information, please visit us on www.fanaticsports.in