Home LIFESTYLE Gudi Padwa Vs English New Year, Decide yourself which One To Follow 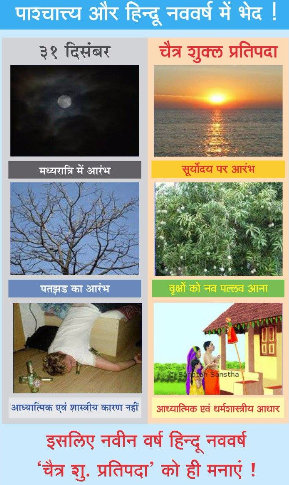 As always, Hindu culture has a meaningful logic behind rituals & traditions. On this day, people wish each other with blessings & sweets. In different parts of the country, Gudi Padwa is known by different names. There is science behind Solah Shringaar & all rituals in India.

How your name affects your life according to Hindu mythology

In Maharashtra, people put a stuck outside their house, bright green or yellow cloth adorned with brocade (zari) tied to the tip of a long bamboo over which gaathi (sugar crystals), Neem leaves, a twig of mango leaves and a garland of red flowers is tied. A silver or copper pot is placed in the inverted position over it. This whole pack is called Gudhi.

Gudhi has many stories attached to its existence. Some say Gudhi was the victory symbol of Lord Ram winning & returning to Ayodhya (City of Lord Ram). Gudhi is also said to ward off evil & negative vibes away from the family since it has air purity content bind together. Welcome spring with new spring colours.

“Traditionally, families are supposed to begin the festivities by eating the bittersweet leaves of the neem tree. Sometimes, a paste of neem leaves is prepared and mixed with dhane(coriander seeds), gul/gur (known as jaggery in English), and tamarind. All the members of the family consume this paste, which is believed to purify the blood and strengthen the body’s immune system against diseases”

The festival is almost like Diwali & celebrated throughout the nation.

In Hindu mythology, it is also said that Hindi lord Brahma created the universe on Gudi Padwa, first day of Spring month.

There is a reason we should celebrate “Gudi Padwa” as new year instead of English new year. Hindus have always been following science in their rituals. There are specific reasons that we should consider Hindu New year as a real beginning of the year.

Hindu New year begins with life of nature. Spring is the most beautiful season of the year where nature procreate its beauty. Spring is the beginning of life naturally & spread positive energy in the universe.

Science has proves early morning are the secret of successful & stress-free life. Our every festival starts with sunrise. Gudi Padwa begins with the first sunrise of the first day(Padwa) of the first month(Chaitra) of the year. The sunrise is the most pure & positive period of the day. We start our new year with pure light.

In English new year, they celebrate it in midnight where only evils are powerful. All the evil deeds are accomplished in midnight where natural positive energy reaches to its minimum level. They start their new year with deep darkness.

Spirituality Base/ No Spiritual Base:

In Hindu culture, we start our day with cleaning our houses & starting the day with enthusiasm. We decorate our house, wear new clothes, worship, & make healthy “Satvik Bhojan” for the family.

In English culture, they don’t have any scripture or spiritual base for the new year celebration.

Though I am not against English culture but I find more beauty & peace in Hindu New year celebration since you can always have a night out party then why not start your new year with positive energy which our Vedik Gurus(Religious Teachers) have gifted us. Moreover, English countries & time zone is different from us then its point less following their rituals blindly.